Rule 1 –  When you tap on a cog, that cog will rotate 90 degrees clockwise and the number being displayed on the cog will be incremented by one.  A one will become a two, a two will become a three, etc.  When a nine is tapped, it will become a zero.

Let’s see what happens if we tap on the middle cog in the bottom row.  It rotates 90 degrees, and its value changes from a four to a five.  It’s just so easy! 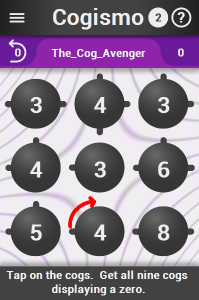 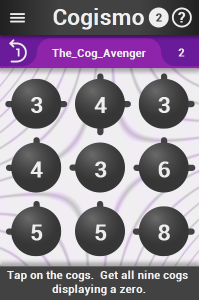 Rule 2 –  The cogs have one or more teeth protruding from the side. Two teeth can never occupy the same location.  When a tooth on a rotating cog strikes a tooth on a stationary cog, then the stationary cog will rotate and be incremented (in exactly the same manner as if you had tapped on it).

Lets see what happens if we tap on the middle cog in the bottom row again. 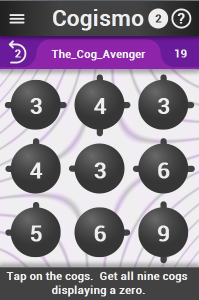 The tooth protruding from the side strikes the tooth on the neighbouring cog, so that cog then rotates. The result is that both cogs end up increasing in value. Still easy!

Rule 3 – The puzzle game is solved when you get all nine cogs to display the number zero.