Imagine if a Rubik’s Cube and a Sudoku got together and had a weird cog-child; that would be Cogismo. The idea is simple, but the result is hundreds of fun and challenging puzzles.

Cogismo is aimed at people who are looking for a classic puzzle, brain teaser or logic game. It’s good for anyone that is looking for some brain exercise. There is no luck in a Cogismo brain game. Solving it is all about logical thinking and the ability to “think ahead”.

Cogismo was intended as a brain teaser for adults,  but it is suitable as a brain teaser for kids aged 10 and over.  In fact, the kids normally “get it” faster than the adults.  Don’t we hate it when that happens 😉    Cogismo is a great family logic game with zero violence, bad language or other naughty stuff. 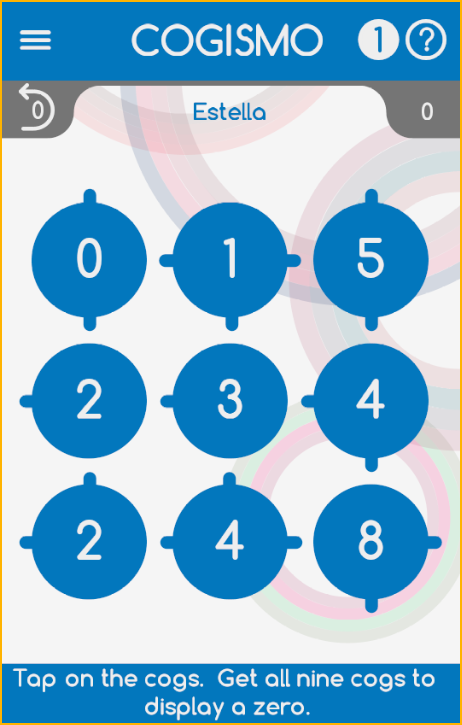 How many Cogismo puzzles are there?

The current Cogismo app comes with 272 puzzle games pre-installed. Once you’ve down loaded the app you don’t even need an internet connection to solve them. There are five difficulty levels. After a little practice you will be solving the easier brain teasers in under one minute. At the harder difficulty levels Cogismo has some very challenging mind games. Some haven’t yet been solved!

Both Android and iPhone versions of the Cogismo app are available, and you can email the brain teaser that you are currently working on (or have just solved) to a friend.

What options are available within the app?

You can change the speed at which the cogs rotate.

You can change the colour scheme.

You can select your own username. You can have up to five usernames on one device (in case you need to share it around the family).

There are in-app help screens, and a tutorial that takes under two minutes to complete.

There is the option to store all of your results on the internet so that you can look back later and see how much you’ve improved.

Am I going to get bombarded with ads?

There are no ads within the Cogismo app. There are ads on this website, and if you want to see how long it took other people to solve the same problem then you will need to visit the website.

What are the in-app purchases?

If you want to use the Undo button to “take back a move” then there is a small charge for this.  Everything else in this brain gym is free.